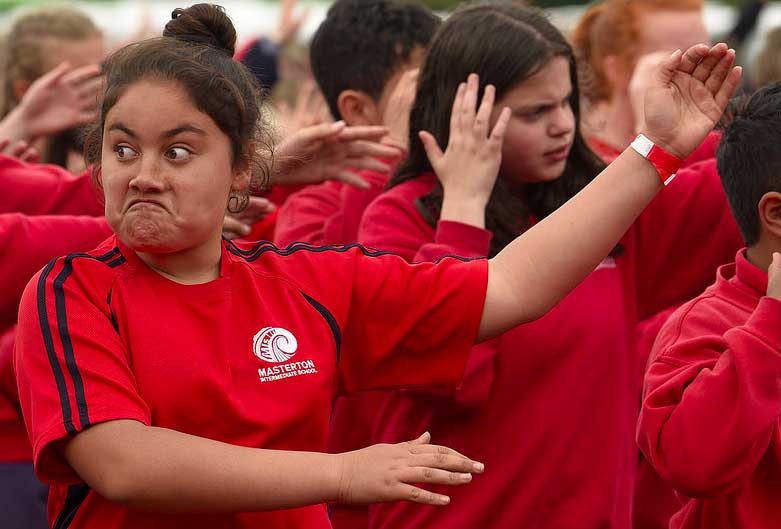 On 2 November schools from around the Wairarapa along with some Early Childhood Centres and community groups came together at Memorial Park in Masterton to try and re-claim the record for the world’s largest haka. The previous record of 4,028 was held by a group in France.

For Masterton spectators, it was as if time stood still as the children passionately performed “Ko Wairarapa” – a haka written specifically for the region by South Wairarapa district councillor Paora Ammunson ((Te Arawa, Rangitane and Ngati Kahungunu) in the late 1980s when he returned to his turangawaewae.

The idea to bring the record home had sprung from Masterton Intermediate School (MIS) principal Russell Thompson who approached our own Trudy Sears to help bring his vision to life.

“In terms of what we have achieved, as a collection of schools and whanau, it’s just been absolutely outstanding.” Russell Thompson, Principal, Masterton Intermediate

This was truly a community event with many participants and spectators from all parts of the Wairarapa region converging on Memorial Park to either perform or witness the event.

“The result was amazing. You had it pictured in your mind, you had it going through your head, but just seeing it, and seeing all the kids getting into it, that was awesome. We may not see it again for a long time.” Mike Kawana, Rangitane Kaumatua

Although we had over 7,000 people attend the event, our final valid participant figure was 6035!

This single event has had a very wide reach with many positive spin offs for our community. Masterton Intermediate School (MIS) provided a number of students who worked with many of the schools and community groups throughout the region, teaching the haka, explaining its meaning and ensuring that it would be performed correctly.

We have seen the mana and pride of the MIS students who taught the haka lifted. Their confidence has grown and they have gained many new skills including learning to work with children and people from all areas of our community including small rural schools, larger colleges, and community organisations.

It also enabled the MIS students to mix and work with students from many other schools and this has helped build relationships that will help with transitions between early childhood, primary, intermediate and college.

Another positive spin off from the event is the correct pronunciation of Te Reo Māori for this haka and the raised awareness of Te Reo Māori as a whole throughout the region. It has given our community the confidence and desire to speak more Te Reo.

<em>“It was a mighty performance and an outstanding experience to witness. It was absolutely awesome, and it shows that we stand together as a region with our own haka. It’s been a great day for Wairarapa.” Lyn Patterson, Masterton Mayor</em>

The event was well supported by a range of people and organisations throughout the region. Of special note is Tranzit Bus Service who donated all buses to transport students to and from the event making 120 trips on the day. We owe a lot to Tranzit for their generosity as without them, many schools would not have been able to participate.

We also had great support from many other sponsors whose contribution was essential to the success of this event.

“It consisted of amazing organisation, and thanks to all the all the people involved… It’s been just incredible, well done.” Viv Napier, South Wairarapa Mayor