A weekly network was set up by WestREAP at the beginning of 2016 to engage parents/whanau in a supportive parent network group in Westland.

Parents/whānau were welcomed into a warm and supportive environment where they were empowered to lead the direction of the weekly group.  The parents took part in planning their programme which was facilitated by WestREAP. The network grew from 5 to 22 parents over the year. Nearing the end of the programme the group worked on becoming a certificated playgroup and now continue to meet weekly at WestREAP with us being their umbrella organisation, while the next network has been set up for new parents/whānau. 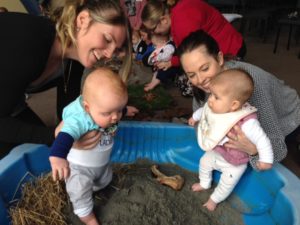 This was an initiative led by our ECE team and Public Health who saw a need for parent support groups in this community. It was organised and planned by WestREAP with the support of the local Public Health Nurse who made referrals and covered health topics within the group.

This proved to be very successful with parents/whānau in this community who enjoyed being part of the network in a relaxed environment, forming meaningful connections with each other. They had a sense of belonging and were valued and supported in their role as parents, while leading the direction of their group themselves.

When initiatives are led by the community or in this case parents, the outcome is much more successful. Parents were empowered to plan their experiences and learn with their child, with support, leading them to branch out, lead their own group which then became a certificated playgroup.